If you have read this blog for a while you know that I’m fascinated by hair powder, especially coloured ones. White powder seems to have been, by far, the most common shade, but I wasn’t the only shade available. Abdeker: Or, the Art of Preserving Beauty lists the following colours;

Fair might be the same as blonde powder, rendered such with some yellow pigment mixed in it. Cherry sounds like a red shade, but flesh stumps me a bit. Skin-coloured powder? Whose skin? Recipes can be found for a variety of colours, so far I have found recipes from black, brown, grey, white, lavender, yellow, rose, blond and the Marechale powders, which turned out a light brown. There are also suggestions to how to tamper with brown hair powder in order to get it in a shade close to the wearers own hair. Most colours seem to start with white powder as a base, rendering the colored powder a bit of a pastel shade. However, one recipes for brown powder starts from black, and there are mentions that other colours are made from a black base, though unfortunately not which ones. Literature also name blue, green, red, and orange-red hair powder.
So, when were these powders used? Well, shades mimicking real hair colours could, at least in the first part of the 18th century indicate mourning. The time of the day could also play part on choice. Black or brown powder for the morning visits, a mix of white and brown for the afternoon and then pure white for the evening. By the end of the 18th century a natural look became fashionable and it is quite likely that people who wanted to keep thee powdered look, while still having a natural hair colour, used hair powders much in the same was as women do “natural” makeup today.

There are also several mentions of the importance of choosing a shade of hair powder that complemented ones skin tone. The white hair powder wasn’t always pure white, but the wearer could mix in a little brown, grey or yellow to soften the starkness of the white. For example, a lady who enjoys spending time outside will have a more blooming appearance than her more sedate and pale sister. Both these ladies should mix a little coloured powders into their white in order to not look tanned or pasty.

For more daring shades, the do seem to have been more for fashionistas than for the ordinary person. The politician Charles James Fox was noted for his use of blue hair powder in the 1770’s. Marie Antoinette, undoubtly not only a queen but a fashion queen as well, made a certain orange red shade briefly popular. Around the time of the French revolution both red hair powder and wigs became popular. A softly pastel-coloured powder in s shade that complemented ones dress do seem like a very easy way to add a little extra to an outfit, for example, in the 1750’s yellow hair powder became popular, especially if one wore black.
﻿

For a long time I wondered why these coloured hair powders doesn’t occur on portrait. The truth is that they probably are, but there are several factors to why it is hard to say with certainty. White and grey were the most popular colours, but it is impossible to say if someone is wearing white or grey powder, because the end result depends on the wearers own hair colours. So far in this post you have seen a selection of ladies and gentlemen who all have different, albeit white/grey hair. A dark-haired person will never get snowy tresses no matter how much powder, because the hair underneath is too dark. A blonde, however, may seem to have truly white hair with less powder. So, regardless of colour of the powder, the hair shade plays a part in how the finished look will be.

Then there is the problem of colour distortion. Time can change the pigments use din a painting and might fool us. Also, many of us look at art in our computer. Colours can be distorted back when the painting was fist put online and individual computers may show up colour different as well. The artist talent is a factor too, a hair that looks like its powdered may just suffer from the artists inability to paint real hair… So, with all this in mind, here are a few painting that depict people who may be wearing colour tinted hair powders.

For some real life comparasition. My hair is naturally a cross between dark blond and light brown. Here is what it looks like with pink powder. 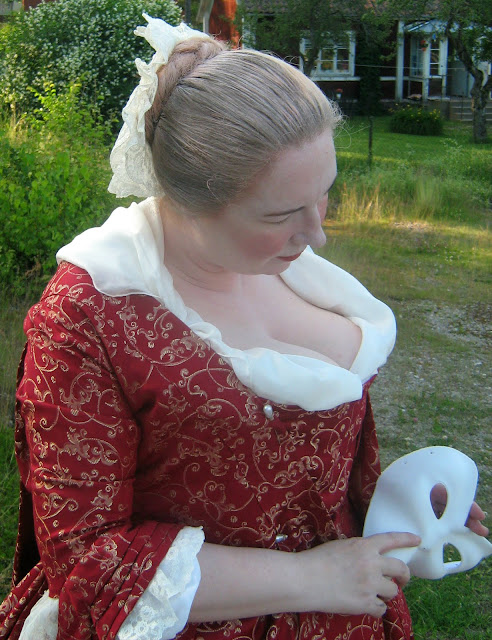 With white powder, Marianne has grey powder on her dark brown hair. 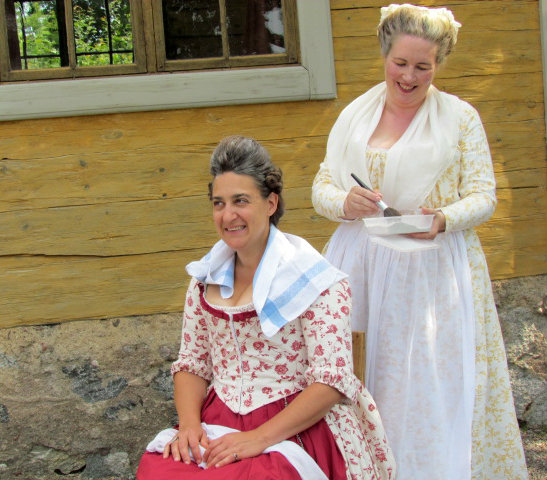 White Marechale powder, a light bown colour that is quite close to my natural hair. 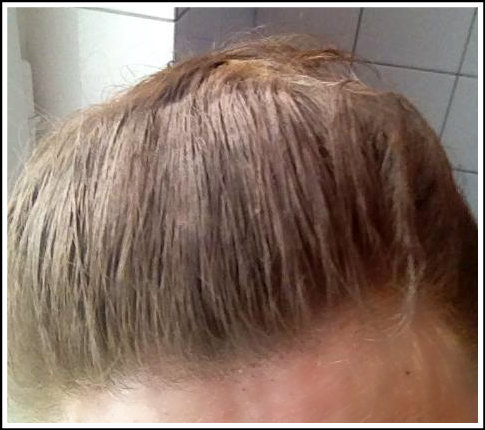 Grey hair powder, the same colour as Marianne wears above. 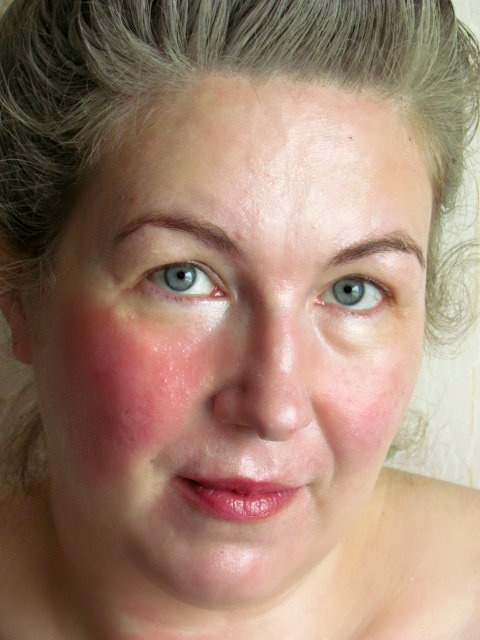 Le Camus, Antoine, Abdeker: or, the art of preserving beauty. Translated from an Arabic manuscript, Dublin : printed for John Murphy, 1756. (Despite the title, this book was actually written by Le Camus, the Arabic translation part is a fiction. Most of the recipes can be found in other 18th Century Beauty books.)

Lillie, Charles, The British perfumer: being a collection of choice receipts and observations made during an extensive practice of thirty years, by which any lady or gentleman may prepare their own articles of the best quality, whether of perfumery, snuffs, or colours, Souter, 1822

Stewart, James, Plocacosmos: Or, The Whole Art of Hair Dressing; Wherein is Contained, Ample Rules for the Young Artizan, More Particularly for Ladies Women, Valets, &c. &c. as Well as Directions for Persons to Dress Their Own Hair, 1782