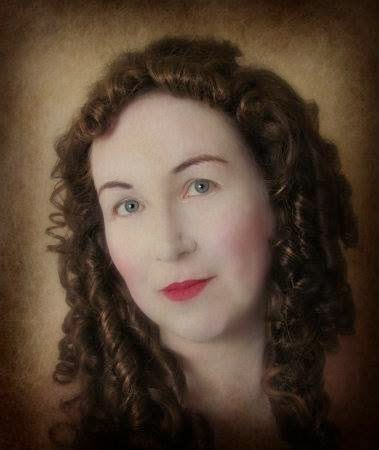 This is part two of an article first appearing in Your Wardrobe Unlock’d. The first part covered thehistory of the hairstyle as well as some 17th century hair care. Here is a step-by-step instruction for creating the style. The hairstyle is perfectly possible to make of one’s own hair, I have made an early, frizzy version with shoulder length hair, for a later version one needs longer hair or/and some false hair to fill it up


Styling the wig
There are several different ways of setting curls on a wig, like using a steamer or dipping it in boiling water. I bake mine in the oven and I don’t use curlers. You will need , apart from the wig, a wig head and, to make styling easier, a wig stand, a comb, bobby pins and a spray bottle with plain water. If you prefer to use curlers, then use them, but personally I prefer to make standing pin curls and then you need something that will function as a dowel, like an old mascara wand.

A standing pin curl is fairly easy to make. You begin with wetting the wig and then combing out a hank of hair, making sure that it is smooth before placing the dowel under the hair, a bit over the ends. 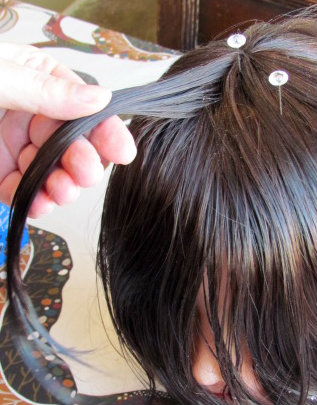 First wind up that short bit of hair on the dowel, which will secure the tops underneath the rest of the hair as you continue to roll up the hair around the dowel. It may be easier if you fold a piece of paper, like Kleenex, around the ends before you start rolling. Roll up the hair as far as possible and then carefully remove the dowel. 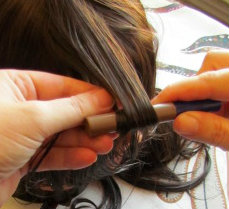 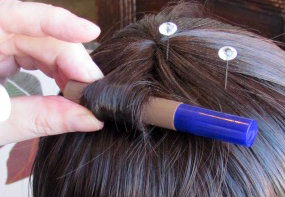 You now have a tube of hair that you secure from both ends with booby pins. The great thing with standing pin curls is that you can vary the size of them after the thickness of your dowel and as there are no rollers, the hair dries faster. 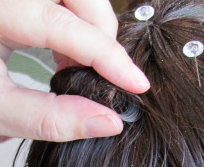 Wigs can be made out of real hair or synthetic. My wig is synthetic and begun its life as a straight extra long wig. It then became an 18th century wig that the cats got hold of, so the first thing I had to do was to wash and comb it. It is much easier to start with a brand new wig! The main inspiration was this portrait of Queen Christina of Sweden, painted around 1650. I like the rather informal style and being Swedish I also like to know that this is a style that was definitely worn in Sweden.

Secure the wig on the wig head and make sure that you know were the mid front is. 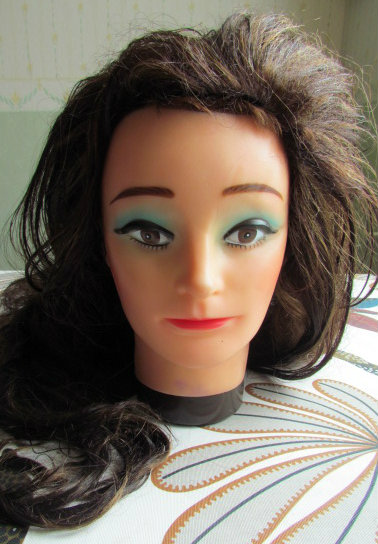 If you want a fringe or curls over your forehead, then leave out some hair in the front, before combing the rest of the hair on top of the hair back, making sure that it is even on both sides and secure into a ponytail. 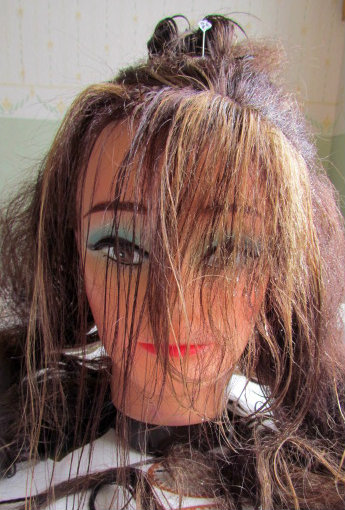 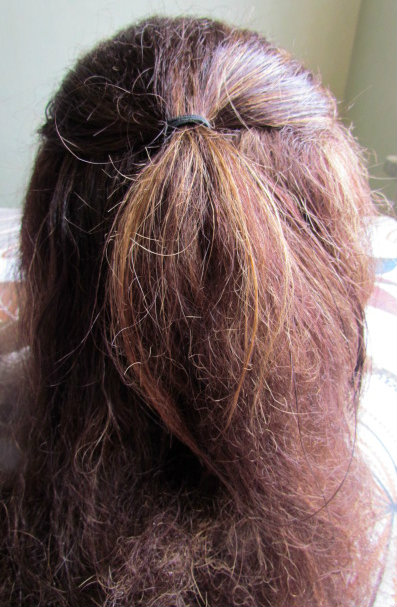 Comb the hair on the back of the head into another ponytail that you have secured just under the first hand. The ponytails will be the chignon on the finished wig and don’t have to be curled, so just pin them up so the ends are out of the way. 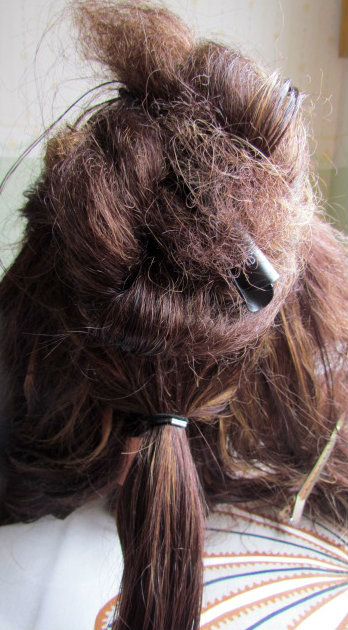 Now you will need to curl the hair on the sides. Make the curls vertical and wind the hair away from the face. My main inspiration had rather irregular curls so I didn’t bother to make the curls identical on both sides. Start from the top and work your way down. Do both sides. 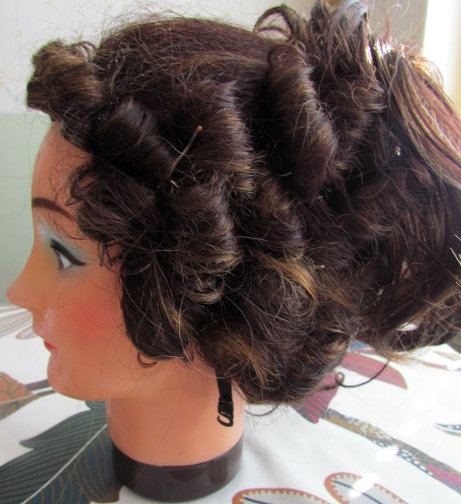 The last thing I did was to curl the hair that I had left out at the front. 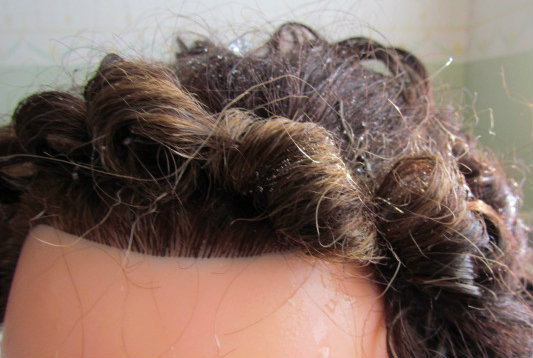 When the wig has been put up in curls the way you want it, it is time to set it. Now it is time to wet the wig really well. I usually hold it underneath the tap, gently squeezing each curl to make sure that the wig is damp throughout. Heat the oven on a very low heat, 50-60 Celsius/122-140 Fahrenheit as you don’t want to melt your wig. Place the wig, still on its wig head on a clean baking tray. As the back of this wig isn’t curled, I placed my wig on its “back” in an oven proof dish to make sure it wouldn’t roll and crush the curls. 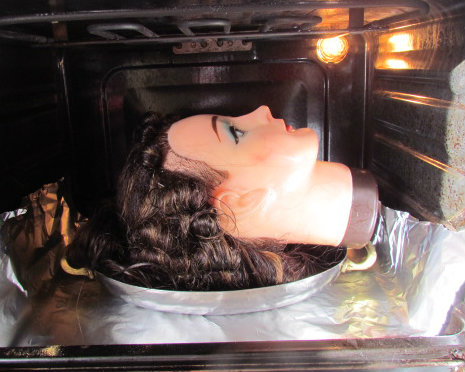 Keep it overnight in the oven on the lowest heat, letting the wig first steam and the dry out. Upon removal, let the wig cool completely and check out the curls to make sure it is all dry. If not, then it needs to get back in the oven for a couple of more hours.

Now it is time to style it. Make the chignon before you take away the booby pins/curlers from the sides. How you do it is really up to taste, you can make a rope twist, a braid or just a plain roll. The fancier your clothes, the more elaborate you can make the chignon. My wig was very long and I had a lot of hair to make a chignon of. The first ponytail was twisted and pinned down to a shape rather like an 8, leaving two strands of hair free. 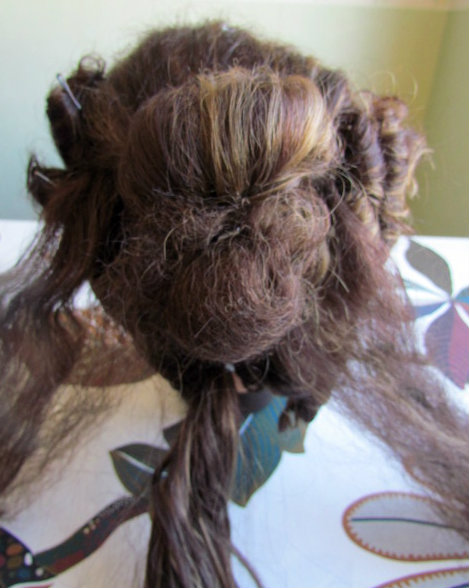 Then I crossed the free strands over the middle of chignon to neaten it up. The rest of the hair was braided and then I finished the chignon with winding the braid around it. 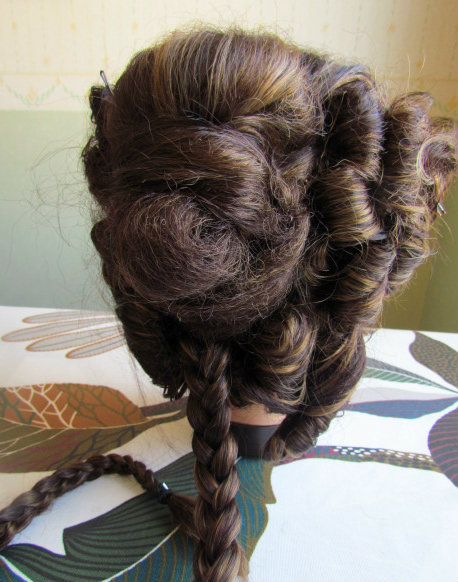 Then I removed the booby pins from the sides. What one does with the curls is really up to taste. They could be brushed into a frizz or just lightly combed to split up the curls. I liked the look of just pulling the curls out with my fingers. 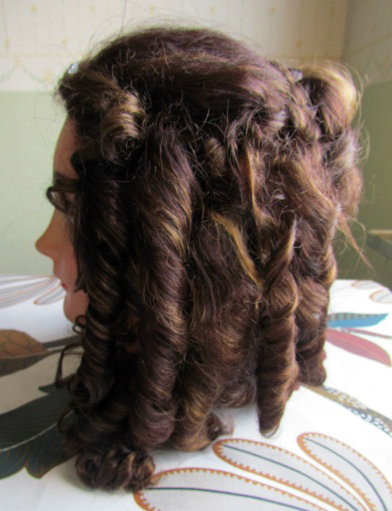 The last step was to arrange the curl at the forehead. 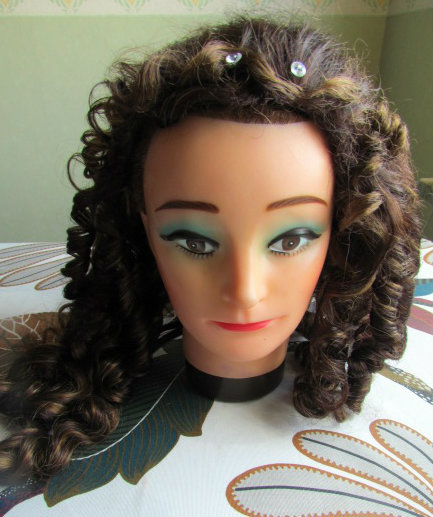 Ready to be decorated and worn. 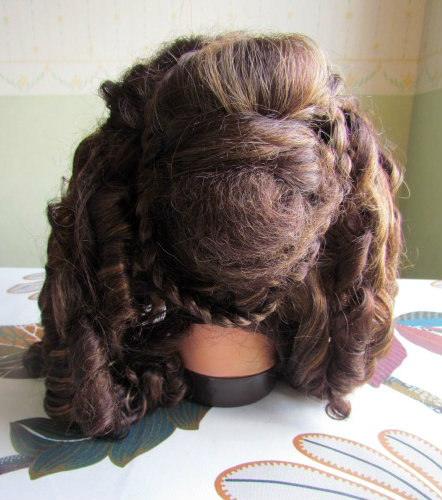 EDIT: After wearing the wig I have found that the curls are too long so I plan to cut them shorter and probably sew the cut bits on the wig to make the side curls fuller.