I have always loved the idea with tinted hair powders and I have written about them before. I was therefore absolutely delighted when I found several recipes in Plocacosmos by James Stewart, published in 1782. The recipes is very straightforward, white hair powder with added pigment and scent. I cheated a little and used plain starch and I Think the the resulting colour would be a little paler if one use powder with added white pigment, so next time I will do that. They are easy to make yourself, but they can also be purchased at Little Bits on Etsy.

Here are yellow, rose and "pink" powder. The book calls it pink, but as the pigment used is blue, it isn't what modern eyes would call pink. They are also scented to match the colour. The yellow smells of Essence of Lemon. The rose should be scented with Essence of Rose, of course, but I didn't have any, so I used Rosewood, which was used in the 18th Century as well, and do smells a bit like roses. The blue one has me stumped though. It is supposed to be scented with Essence of Pink. Do you know what that is? I haven't got the slightest, so I opted for Lavendar instead. 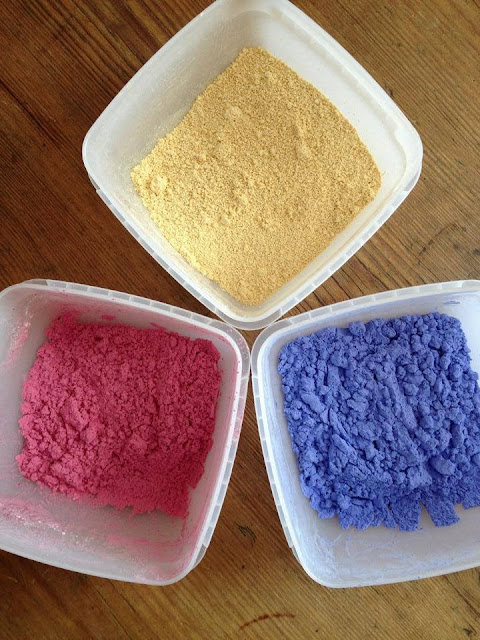 This weekend I had a chance to try out my powders on a few friends as Skansen had their annual 18th century weeks. Marianne has very dark brown, almost black hair 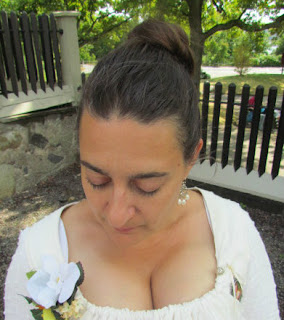 Here she is with blue powder. 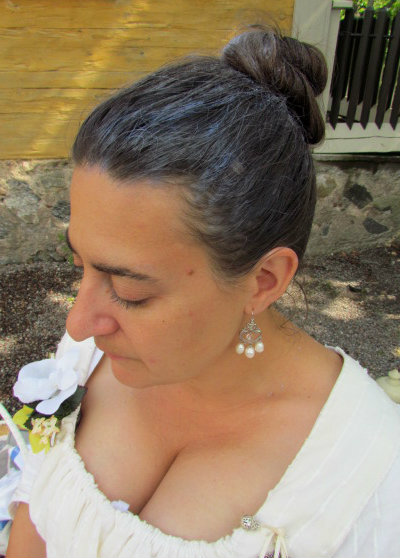 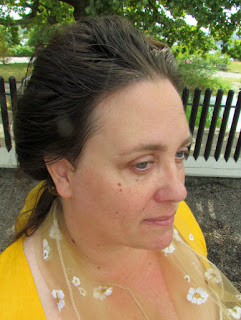 Tove the maid assisted, but she looks rather sceptical. 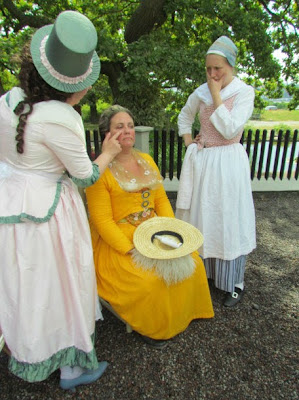 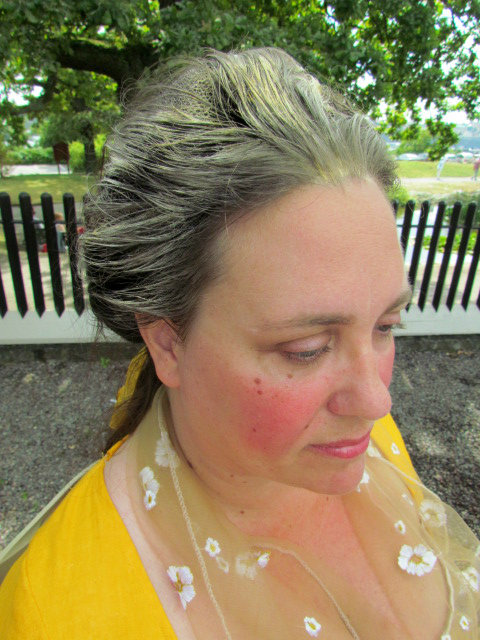 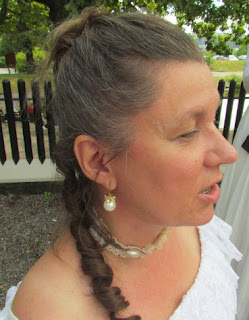 She opted for something more discreet, so she is wearing the light brown Marechale powder I made a while ago. Her hair colour is quite similar to my own, and as you can see the same thing happened to her- the Marechale powder is barely visible, though it gives a powdered look. And it smells heavenly. 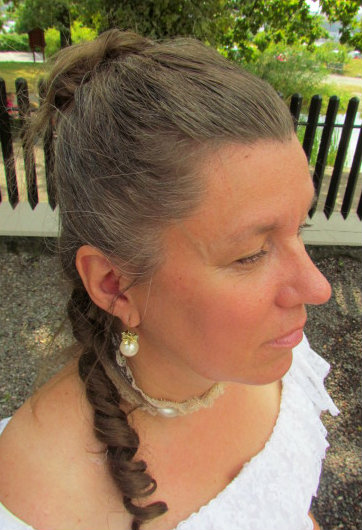 Me, I tried out the rose powder, to match my outfit. 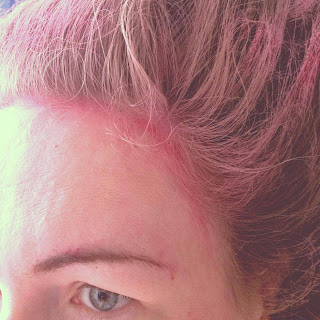 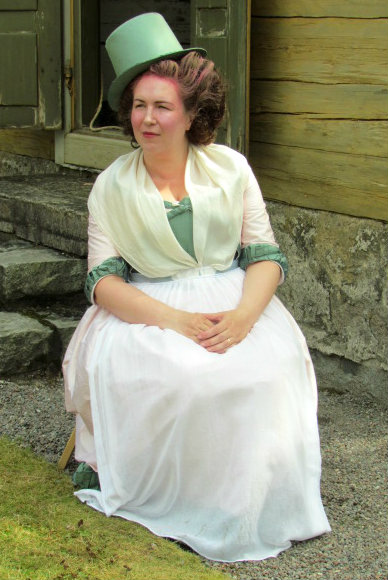 We spent both Saturday and Sunday at Skansen, so on Sunday I used white powder instead. 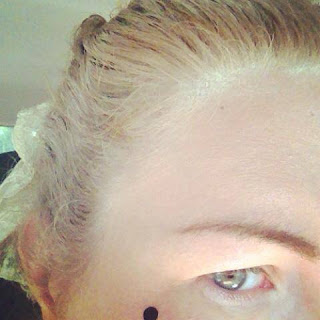 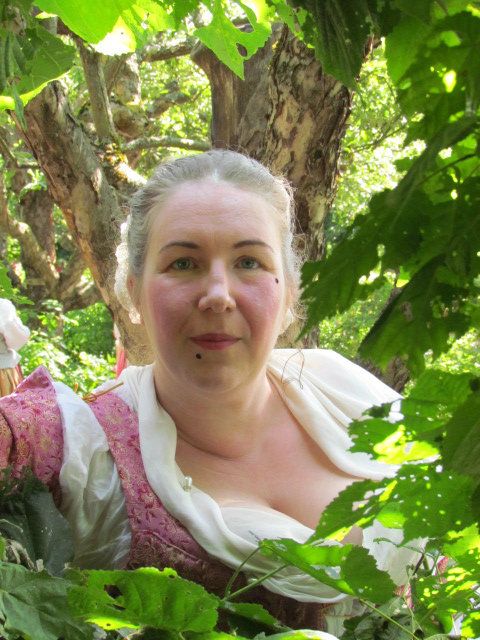 Using coloured hair powder makes for a great effect and I really like them. I do wonder if it wouldn't be better to first powder the hair white and then add the tinted one as an accent, though. For practical reasons I used hairspay to make the powder adhere, but it makes it quite hard to get even. I haven't been able to make a proper hair pomade yet, but when I used my own hair as I did on the Sunday, I make the hairstyle with loads and loads of hair wax. It's quite messy and sticky (which real hair pomade probably is as well), but it is so much easier to get the powder even and it sticks on the hair powder very well. 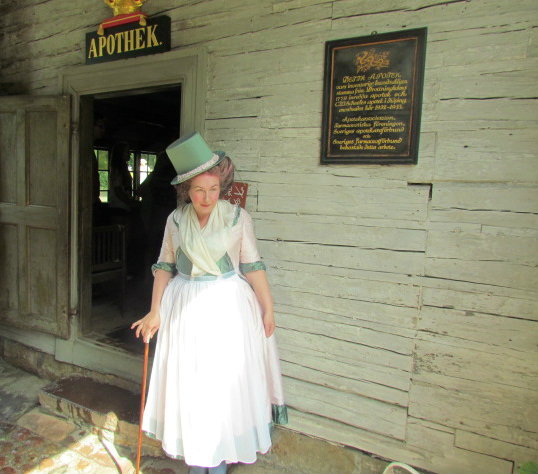 Skansen has a number of old buildings ranging between the 16th to the 20th Century and to my absolute delight they have an 18th Century apothecary, Kronan (the Crown). I spent some time reading on all the boxes and jars and there were quite a bit of things I could have purchased for my makeup experiments, had they still been selling things.


One of the things they sold in the 18th Century were mummy powder... And they have a stuffed Crocodile hanging from the ceiling, which I found the height of cool when I was five.