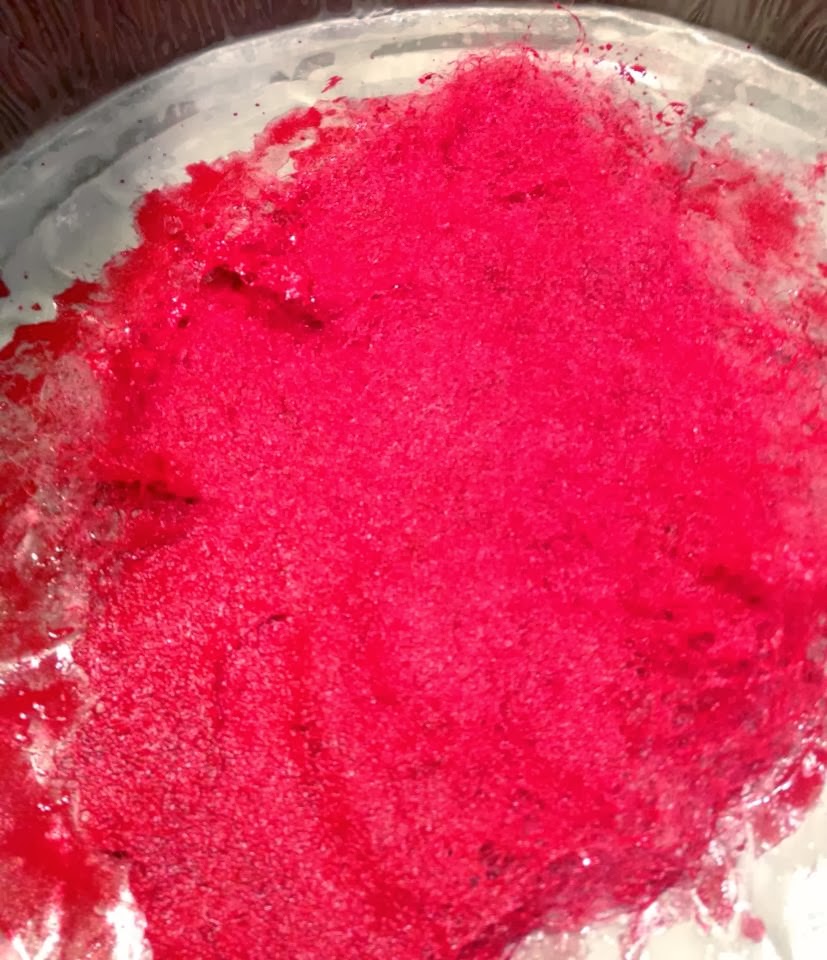 XIV. Spanish wooll, wherewith women paint their faces red.
Boil shearings of Scarlet in water of quick-lime half an hour, of which take two pound, to which put Brazil two ounces (rasped) Roch Alom, Verdegrise, of each one ounce, Gum-Arabick two drachms, boil all for half an hour, which keep for use.
XV. To do the same another way.
Take Spirit of wine one pound, Cochenele half an  ounce, rasped Brazil one ounce, Gum-Amoniack three drachms, mix and digest till the Gum is dissolved, then boil it gently and strain it for use, into which you may put old linen rags, or Spanish wooll at pleasure. / Polygraphice, William Salmon, 1672


Two recipes that differs quite a bit. The first recipe is more complicated and potentially more harmful. Shearings of Scarlet is simply scraps of red fabric, dyed with Cochineal, a bright red pigment, which is a thrifty way of taking care of the leftover after a sewing project or worn out garments. Quicklime, Calcium oxide, which is probably needed to make the fabric scraps give off its pigment, is a caustic substance which is definitely not advisable to inhale or apply to the skin. Rock alum is an astringent, and Gum Arabic a water soluble sap from acacia trees, which would bind the pigment. Brazil wood gives a brownish red pigment, but verdigris is a green pigment which is made be made from copper. It is poisonous and should not be applied to the skin. I find it a bit curious to add green pigment to rouge.  All in all, this recipe is a bit complicated, were do you obtain Cochineal dyed fabric to tear up, and is also harmful for you. 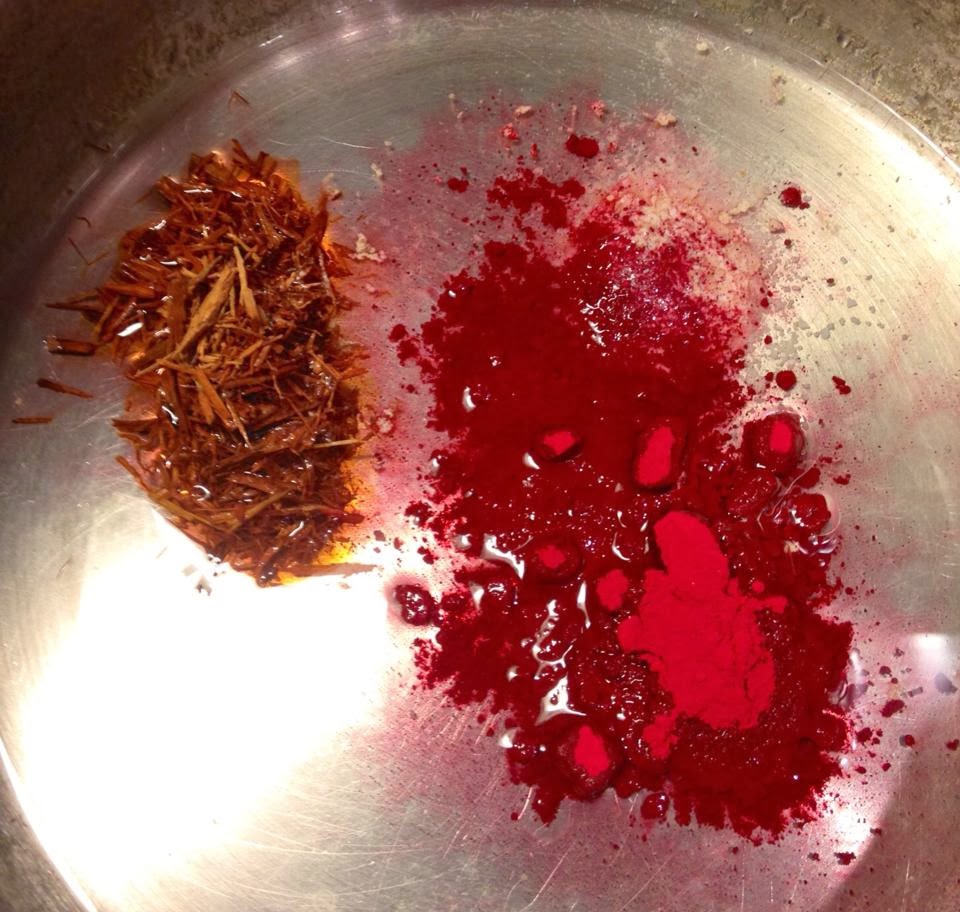 The second recipe, on the other hand, is perfectly doable. The alcohol is drying to the skin, but if one isn’t too sensitive, that isn’t harmful. It also makes use of cochineal as a pigment. Instead of Gum Arabic this recipe calls for Gum Ammoniac, a gum-resin, though I can’t really say why it is to be used instead of Gum Arabic.


These recipes are from the 17th century, but Spanish wool was available in the 18th century as well. Charles Lillie notes in The British perfumer, written around 1740 that it comes in various qualities and is cut into pads, the Spanish sort into the size and thickness of a crown piece (about 4 cm across), the Chines makes them a bit larger. There is also Spanish papers were the pigment is spread on paper instead, which makes them convenient to carry around in a picket book. He also says that the best Spanish wool should glisten in gold and green, which my version most definitely does not. Perhaps it would if there had been Verdigris in is. 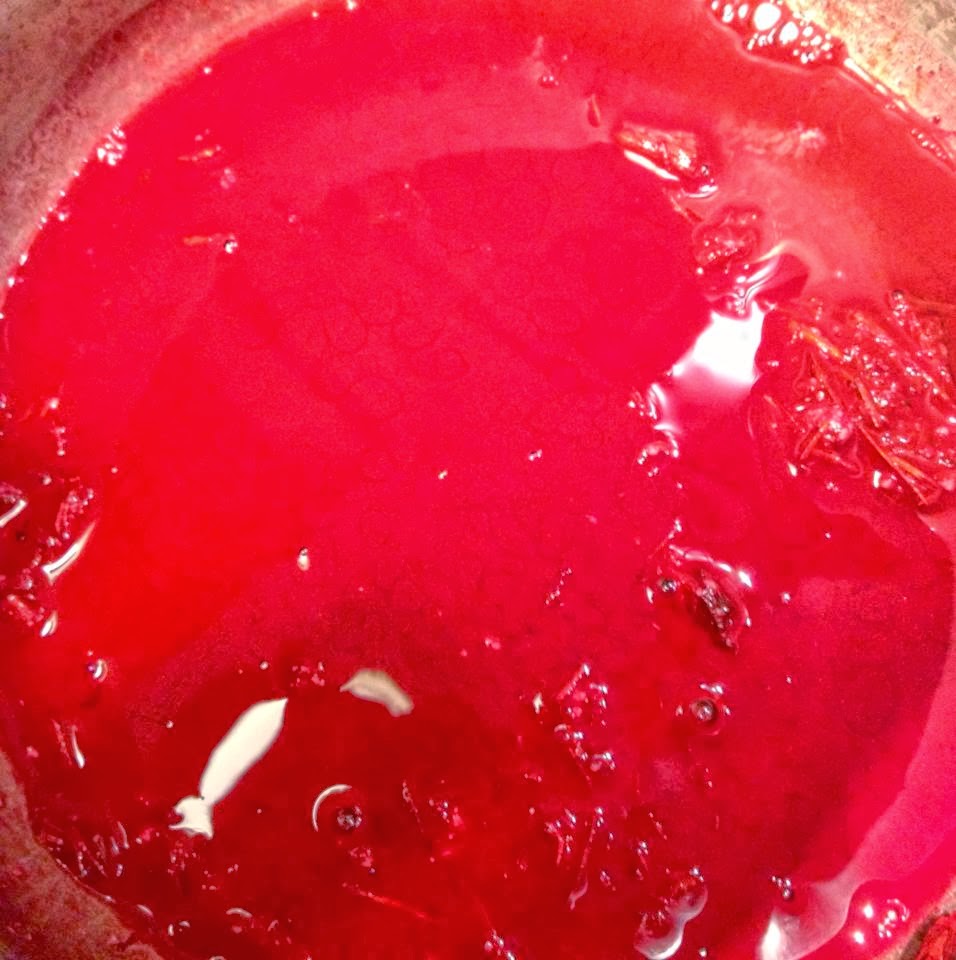 Making the recipe
It was really very easy and fun to make. I used Vodka to which I added cochineal, Brazil wood and pulverized Gum Ammoniac. I stirred it a bit to dissolve the resin and then let it simmer a while before I strained it through a coffee filter. Then I saturated a piece of clean lamb’s wool into the solution and left it to dry. In retrospect I think I may have used a little more wool, but that is not really a problem. When dry I cut it into round pads. To use it one will damp a pad slightly and rub it into the skin.


As you can see it turned a very bright red. I suppose that the Brazil wood tampered the cochineal somewhat, but not so I noticed. It also became quite bright red on the skin and I think I will have to be very careful to just dampen the pad slightly, at least as long as there are a lot of pigment left. 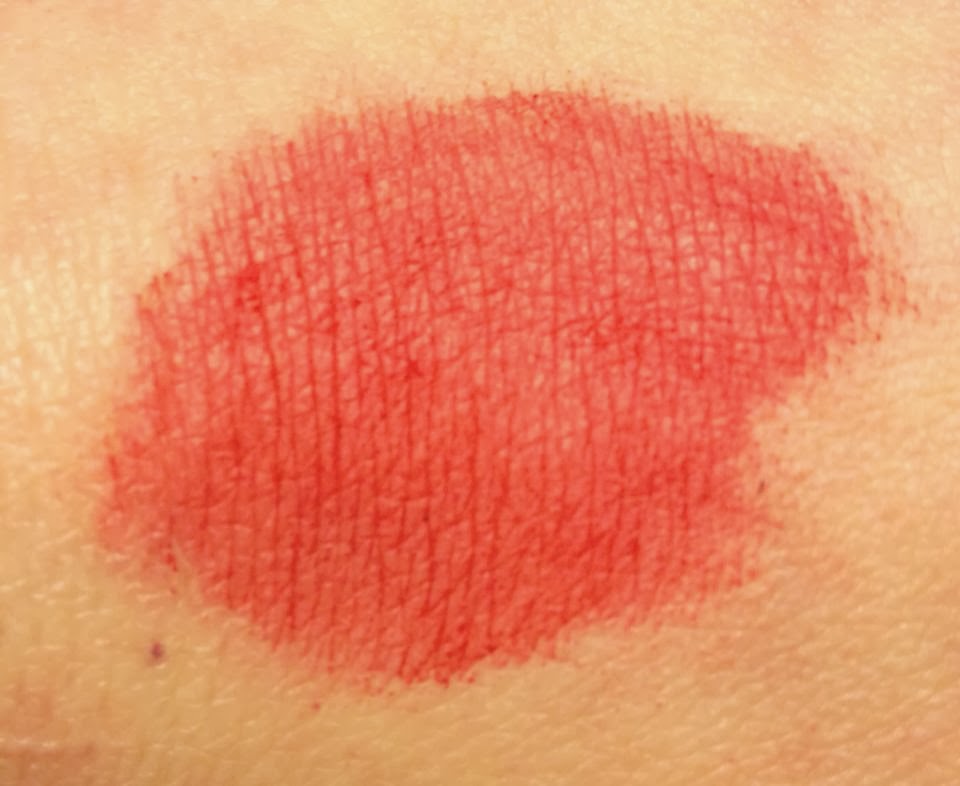