I'm back after having been distracted by such trifles as pneumonia and marriage. The upcoming weekend will be spent in the 18th century and I thought it called for making this hair powder.

Corn starch was used for hair powder in the 18th century, though at the end and mainly in USA, but today that is readily available in food stores while I have no idea where to get wheat starch. And starch is starch, so I didn’t feel bad about substituting it. Orris root was found in a store that caters herbs. The big difference is the original recipes call for calcinated and pulverized bones. It’s not something I have readily at hand, but what it is, really, is calcium. Dolomit that you buy in health stores is made out of calcium and magnesium and can be bought as a powder. As magnesium was used for white pigment in the 18th century too, I felt that this was the best substitute I could come up with.

I made a smaller batch than the original recipe, ¼ of it. The amount of Dolomit is an estimated guess for how much is 6 cuttlefish bones and a handful of bones when pulverized? Its main purpose is to whiten the powder and I would say that what shade you want is very much up to taste. I don’t think it would change the texture in any way if you added more white pigment.


The result
As all my ingredients were pulverized when I started, the powder was incredibly easy to make. I just poured everything into a bowl. 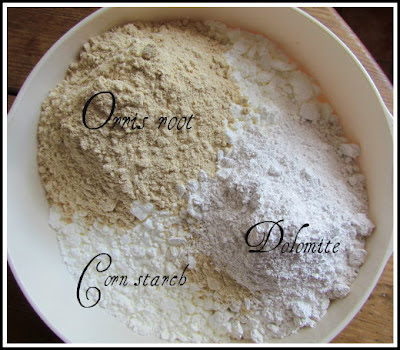 The starch is in itself white and the Dolomit was very white, but as you can see, the Orris root was more of golden beige. However, when I had sifted it all, the white powder was just white, albeit of a creamy white rather than stark white. I like that, but it would be easy to add white pigment to make it whiter. I then split the powder into three and coloured one part grey with the help of ashes. I used 5 tablespoons, until I got a shade of grey that I liked, but the recipe doesn’t give and suggestion for how much, so I think that is entirely up to your own taste. As I have itched to try a more colourful powder and as I have iron oxide, I decided to make rose coloured powder, as that colour is mentioned in Abdeker. I used 4 ml pigment, but again, the amount is up to your own taste.

The finished powders looks like tasty to my eyes. Next week I can treat you with how they look on hair. Hopefully I will have opportunity to try it on not only my own hair, but on others too. I’m really interested in seeing how different hair colours will affect the finished result.

What would I do different?
I would like to explore differently pigmented powders in the future, but also more perfumed ones. Orris root has a pleasant violet-scent, but it was very faint and the powders smell next to nothing. So I will definitely play around a bit with both colours and scent. I plan to make Cyprus powder in the near future, for example.

Would I do it again?
Yes, definitely. It was extremely easy to make and I like the effect powdered hair gives, so even if I would stick to plain white, I will make more powder when this back is gone.