Last year I started to make real pearl powder, but at the time I lived at our summerhouse for several weeks as the plumbing was renovated in our apartment, so I made it and then forgot about it. So, finally, here is the result.

I used real pearls, but the small and irregular kind that is called seed pearls. As that was the kind of pearls that apothecary's kept in the 18th century for medical purposes, it seems exceedingly likely that they were used to make pearl powder as well. Nowadays you find seed pearls in hobby stores and I bought the smallest amount possible for my experiment. I put them in a small bottle and poured enough vinegar on top of them to cover them. Here I made a mistake and took apple cider vinegar instead. Though I poured it away and took real vinegar, a slight discolouration remained.

Almost at once flakes of nacre could be seen floating around in the vinegar and the pearls noticeably shrunk over the next couple of days and the holes in them were enlarged and more and more nacre could be seen in the vinegar. Then it stopped, or so I thought. I poured in some more vinegar and nothing seemed to happen for a day or two and then I noticed that the pearls were floating in the vinegar! Upon examination I realised that the pearls were completely hollowed out and only a thin layer of nacre remained! When I pressed down on one it felt like it does when you press down on a boiled pea and I ended up with peal mush on my finger. So I poured everything in a mortle and mushed them all throughoutly, put it all in a bowl and let the vinegar evaporate. 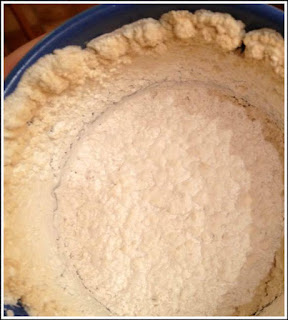 As you can see it behaved quite funnily, climbing up on the walls on the bowl. Good thing, actually, because the discolouration emigrated to the top. Though it looked solid, the pearl powder was really very brittle, so I just broke off the discoloured parts. The surface was a bit shiny in a satiny way, but inside the peal powder was just white. This suprised me a bit as I had expected it to be pearlescent. After reducing it to a powder it became a somewhat satiny white, but I found that when I pressed down on it, pearlescent glints could be seen. It was very subtle and I couldn't manage to capture that on a photo. 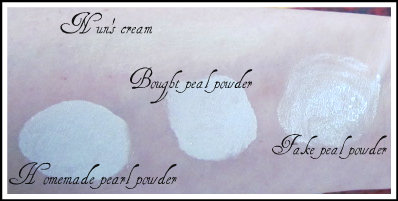 Here you can see how alike the both pearl powders are. I mixed powder with an equal part of water and it turned into a semi-opaque whiteness. You can see the pearlescent glints at all. Alongside is Bismuth and it is very easy to see why the literature says that even if this was called pearl powder as well, it has a completely different look. It is much more shiny, but a lot less white. Almost impossible to see is a version of Nun's cream that I made with real pearl powder. The ratio here is one part powder to two parts pomade and it doesn't show up much at all. It is more visible in reality than on the photo, but it only whitens the skin slightly, though it evens out the skin very well. I think it is quite light-reflecting, even if the nacre isn't visible, it is still there. 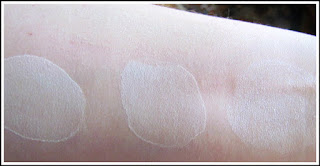 The amount of whiteness a pigment leave on the skin is partly due to the pigment, but also on how much you use. Even after brushing my test areas with a powder brush, the pearl powder stayed on quite well, though it is not very opaque. In the future I need to test all my white pigments to see how they compare to each other, but here and now I can just say that I find it interesting that pearl powder, which was the most exclusive white pigment you could buy, doesn't leave a very opaque whiteness. 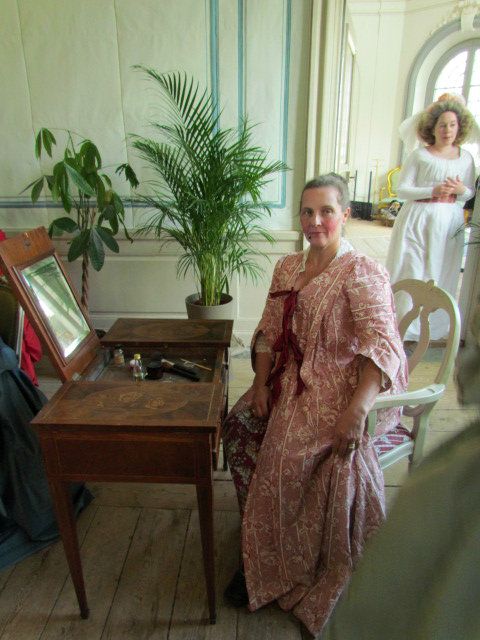 I still need to mix up pearl powder with liquid and try, but last week I had the opportunity to try the Nun's cream when I made up my friend Anna as part on the entertainment at a big party my 18th century society held. I was allowed to put my stuff on a bona fide 18th century vanity table, which was quite exiting! The Nun's cream did brighten Anna's complexion and she looked slightly paler, but she didn't look overly made up with white makeup. Her rouge is the Economical rouge with Carmine as pigment and the lip paint is pigmented with Alkanet.

I also made Lithia's hair. As it is dyed a bright red, it turns pink when it is powdered with white hair powder. She is also using the Spanish white I made. Her skin is very white naturally, so the makeup just leaves her skin glowing. 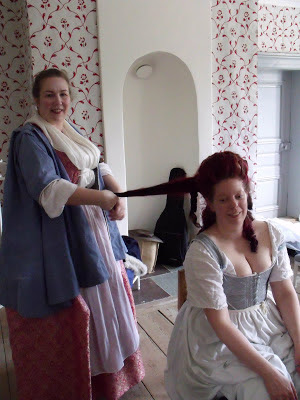 I did a try on a Rococo hairdo, which I was semi-pleased with . The front is just brushed back and put up in a top-knot- preferably there would have been curls and a bit more going around here. The back was inspired by a bust of Madame Pompadour and made up in three braids that was pinned to the top knot and the ends curled. Of course I should have made sure that more pictures were taken, but I was too busy having fun. 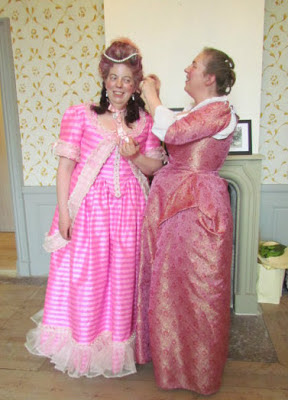 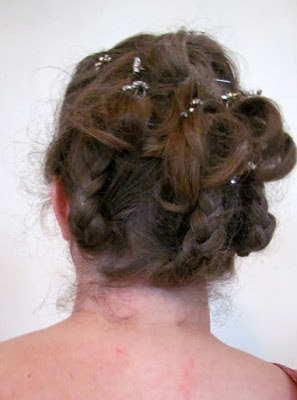