I grew a bit tired of reading about the 18th century and took a little break into the 17th instead. It is one of my favourite periods, and I think it is a pity that it isn't better loved. This is meant as an overview over makeup and hairstyles, which means that there are things I don't mention. The focus is on European upper class ladies, the gentlemen will get their own post. I have chosen paintings that are good examples, but also from known beauties, to give a sense of what kind of looks that were popular. Click on the links under each picture to see the whole painting.


Black and rowling is her eye,
Double chinn’d and forehead high:
Lips she has, all Rubie red
Cheeks like Creame Enclaritéd:
And a nose that is the grace
And Procenium of her face. /Robert Herrick

The ideal beauty of the 17th century should have a fair, round or oval face with a well-proportioned nose. A high forehead and a small double chin. Dimples in chin and cheek . The eyes should be large and dark, the mouth quite small, but with full lips, the lower one should be fuller than the upper. The teeth should be white and clean and in equal size. The hair could be any colour, but brunettes seem to have been  very popular, but regardless of colour it should be long, thick, curly and cleanly kept.


Pale skin was considered attractive and upper class ladies took care not to be sun-burned. Makeup was also used to make the skin appear as fair as possible. Corson makes a distinction between enamelled and powdered ladies where the first category painted themselves with thick layers of makeup, which gave the skin a slight sheen. Powdered ladies had a more matte skin-tone and probably a more natural look. A late 17th century recommendation was to rub the face with poppy seed oil and then use a white powder made of calcinated bone. There were also pink and flesh-coloured powders, which perhaps didn’t look natural, but indicates that a dead white face wasn’t always wanted.


White paint could be made of talk or pearl powder, with is quite harmless, and Bismuth could be used as well. But the number one white pigment was Ceruse, made of lead, which is very harmful, and mercury which is possibly even worse. There are, for example, a recipe were equal parts of lead white and mercury chloride ( also a white powder) are mixed with lemon juice and rose water to whiten the face. As both pigments are extremely poisonous, it can hardly have been a good idea to use that!


When studying portraits from the period, those from the first two decades seems to have the thickest layers of white makeup, none, or very faint rouge and lip colour and the eyebrows are left in their natural state. As the century progresses the white makeup looks less heavily applied and rouge came into more use. It is usually sparingly applied, aiming for a quite natural looks, though the mouth is often very red.


A bit bizarre, but not harmful, unless one was allergic to shellfish, was rouge made from boiled crabs. Vermillion, red pigment derived from mercury was common, but there were safer alternatives as well. Tinctures coloured with sandalwood, brazil wood, carnation, cloves, or cardamoms would provide a safe rouge. Cochineal were also used, which meant that rouge could be found in both warm and cold red tones. For ladies not belonging to the upper classes, cheaper rouge pigmented with ochre were available, which they evidently used quite liberally.


Eyebrows are kept groomed and though there are recipes for blackening them, they usually look quite natural on portraits. There also seem to have been some use of eye shadow. There are portraits were eyes seems to be shaded with brown or grey and Bulwer rages against the fashion of “painting circles around the eyes” in the mid-17th century. He also mentions tawny as one of the colours used in facial makeup, which is a yellow brown shade which seems more suitable for eye shadow than anything else.
For ladies not wanting to paint, there were a number of washes aimed for giving the skin an even a lustrous looks. Some contained talc or ceruse, which would help whiten the face without making it look painted. Regardless if makeup were used or not, the advice for facial care was to wash the face with warm water and a wash ball (soap mixed with herbs and spices), dry it use a wash of some kind like bran water and rub in some pomatum. A beauty regime quite close to modern standards. A lady who steered clear of lead and mercury could probably have a quite nice skin with such habits.


The fashion of patches became huge during the 17th century and ladies could wear many of them at once, all over the face. The black patches were made from satin, taffeta and, for a cheaper alternative, paper, and were gummed to make sure they stuck. At the end of the century, they were used more sparingly, but they were still very popular.


Perfumes were very popular, most of them quite heavy with musk, ambergris and civet. As a comparison, today a perfume has one, or possibly two,  of those ingredients (synthetics today) acting as base notes, which grounds the perfume and makes it long-lasting, but very little is used as to not make it too over-whelming. In the 17th century you could find perfumes which solely contained these three very overpowering scents in equal amounts. There were also perfumed made of ox dung which to my modern nose seems rather disgusting. Perfumes could be similarly made to modern ones, but they could also be found as powder, oils, and hard pomades, wax mixed essential oil. One recipes in Plocacosmos, for example, contains wax and oil of musk and cinnamon. Gloves were usually scented and powder could be sewn into small bags for scenting linens or kept in clothes.


Dental medical care was practically non-existent, so even if the ideal was a full mouth of white teeth, it must have been an ideal that few possessed. There were various recipes for dentifrice powders and though some contained abrasive powders like pumice stone, not all of them were and shows that there were an interest in at least trying to keep the teeth nice.


The fashion for hair powder took the first wobbly steps in the 17th century and provided an easy way to change the colour of the hair, but it doesn’t seem to have been universally used. Hair in portraits are often depicted as glossy, something that powder effectively remove. There were also various recipes for hair dye, promising tresses in gold, white as silver, yellow, red, black and green! I wonder who wanted green hair. To keep the curls in place Gummi Arabicum of egg-white were used.


The first two decades or so, the popular hairstyle was rather high, the hair were brushed over a padded form to form a kind of halo around the face. It was smooth and often decorated at the highest point. Originally quite high at the top, it gradually became more rounded around the face.

Aged around ten, the princess is dressed and styled as an adult.


Newly wed at the age of 17, the former princess' hair is several shades darker than when she was ten.


The Swedish queen is quite pale, but doesn't seem to be using either rouge or lip paint.


This fashion doll from around 1600 gives a glimpse of how it may have looked from other angles. 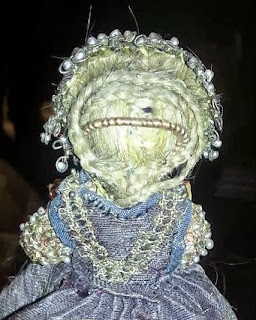 Around 1620 the big hair disappears and during a transitional period hair gets flatter and looks quite short around the face.

Eventually a style develops that with some variations remains fashionable for the next 50 years. The hair on the top of the head and the back is drawn into a knot, while the hair on the sides is hanging down, either frizzed or curled. During the 1630's a short fringe, or curls over the forehad, were popular.

During the 1640-50's the hair is often parted round the crown of the head and the front hair is parted in the middle and curled.

Not considered a beauty, Queen Kristina seem to have had a beautiful hair.

The arrangement of curls grow more complicated.
When the curls got wider around the face, it sometimes had to rely on wire to keep the shape.

Around 1670 the hurluberlu, or hurly-burly,  becomes popular. Dense curls were clustered over the ears, sometimes with longer curls hanging down from them.


There were also a hairstyle were the curls were kept more close to the head around the head and flat on the sides, with a large, low chignon at the back.


In the 1680’s the hairstyles started to become higher again, with or without the fontange, a layered starched and wired linen structure, to achieve even higher heights.

Then, of course, there was the Spanish influence, doing its own thing, both when it came to fashion and hairstyling.

Pointer, Sally, The Artifice of Beauty, 2005

Beauty in the 17th century

Courtly beauty secrets from the 17thcentury