Making use of what I wrote in my last post, I then made two makeup-looks, both based on period recipes, but turning out very differently!


Two interpretations of 17th century makeup
As have been described there were several kinds of pigments as well on hot to apply them, so I wanted to do two makeup looks, one powdered and one enameled, to show how different makeup could really look.


For the powdered look I started with applying modern cold cream, letting it soak in before I applied the makeup. I used a  liquid rouge made from red sanders boiled in alcohol. The rouge is quite translucent and works very much in the same way as modern lip or cheek tint. I applied it with a brush on the lower part of the cheeks, using my fingers to even out the edges. I applied several layers to build up the colour, letting each layer dry completely before applying the next one. 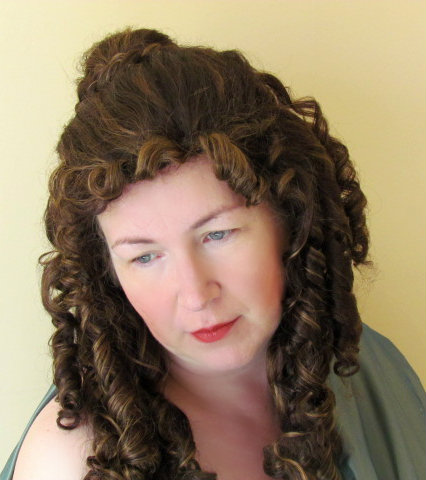 When I was pleased with the rouge I applied white powder all over my face with a large brush, patting it in before I brushed off the excess. I used real pearl powder as I have pale skin naturally and I really like the way pearl powder evens out the skin tone and gives it a luminous glow rather than a stark white face. The lips were painted with a lip salve coloured with red iron oxide as a substitute to vermillion. As this look is rather soft I opted to not paint my eyebrows at all. 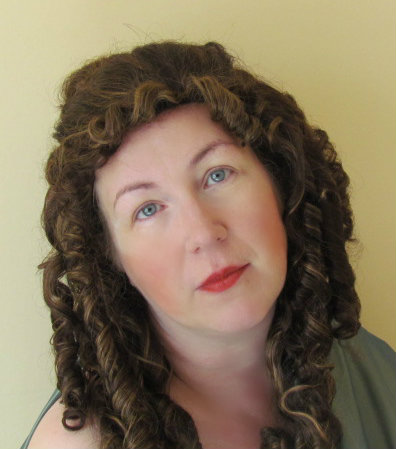 The enameled look was made by mixing white lead substitute with an equal amount of water. I used half a teaspoon of each and used it all. This is a period way of making white face paint and I applied it with a brush, though fingers or a sponge could also have been used. Pigment + water makes for a rather primitive foundation and it demands some time and patience to get even. I have found that the best way is to apply it is to let it dry completely after the first application and then work the face over with moist fingers or a very slightly damp sponge to get the face paint as evenly as possible. The result stays put very well, but can be a bit drying to the skin, so it is important to use a face cream as preparations. I used the same cold cream as I used for the powdered look. 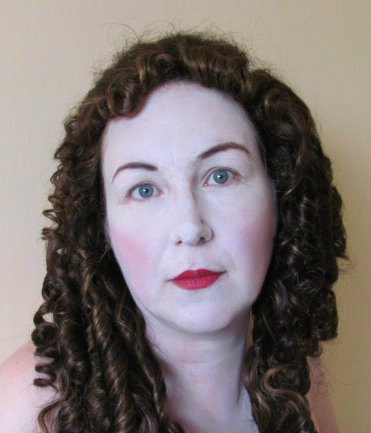 Lips and cheeks were painted with Spanish wool. It is rouge made by saturating lamb’s wool with a liquid pigmented with Cochineal and Brazilwood. When the wool is dry it is cut into round pads and when one wants to use them, the pad is dampened with water. The pad can be used directly on the face, but I find it easier to use brushes to get the paint where I want it. As both the white and the red paint is water soluble, the red mixed with the white and made the rouge pink on the cheeks instead of red. I also used a little black iron oxide mixed with water to darken my eyebrows. 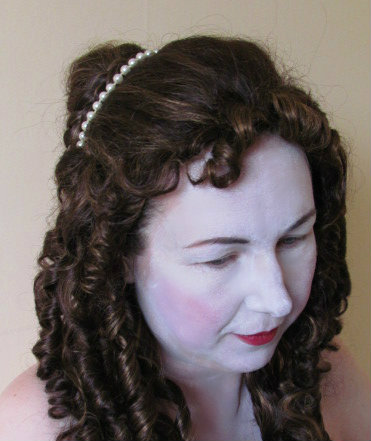 I didn’t have any patches, but played a little with this photo just to show how patches could add, or perhaps subtract, to the finished look. 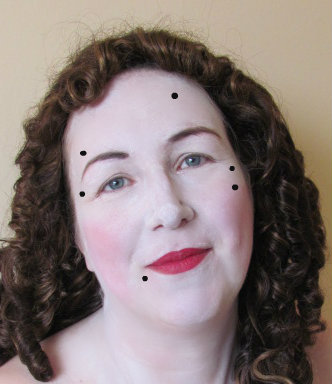 As you can see the two makeup looks really do look quite different. With my modern sensibilities, I vastly prefer the powdered look over the enameled one.

Makeup options for the modern time-traveler
I used makeup that I made myself after 17th century recipes, though updated to omit any dangerous ingredients. It is fun, but can be a bit complicated and there can be many, and sometimes expensive, ingredients to purchase. A simpler and cheaper alternative is to purchase just the pigments and use them with modern cosmetics. White pigments can be used as face powder, of mixed into a face cream or just plain water to make a foundation. Red pigment can be mixed into uncoloured lip balm or mixed with rice powder to make dry rouge.

It is also perfectly possible to achieve a period look with modern makeup. Choose a pale foundation and/or the palest powder you can find. If using rouge, choose true or warm reds or cool pink shades. There are also a few companies who sell cosmetics made after old recipes.

Useful links
Ageless Artifice was a really nice company that made cosmetics after old recipes, but unfortunately they gave it all up a few years ago It have been said that their 17th and 18th century products will be sold by Dobyns and Martins, though I haven’t seen anything about it on their webpage. They do have some ingredients suitable for 17th century cosmetics, though. As for now they only ship to USA and Canada.

Little Bits is an Etsy-based company that sells 18th century cosmetics made after old recipes. I haven’t personally bought anything there, but I have heard good things about them.

TKB Trading A great variety of cosmetic-grade pigments. I buy my pearl powder here as well as most of the pigments I use.