In yesterday's post I talked about a recipe for lip salve that used Alkanet root as pigment. Here is the result;

Updated recipe
Almond oil, 22 ml
Coconut butter, 6 gram
Bees wax, 2 gram
Alkanet root (in powder), 3 ml
Rosewood oil, 3 drops Note: A bit late it has come to my attention that Brazilian Rosewood is an endangered species, so my recommendation is to leave the salve unscented or add a few drops of another scented oil. 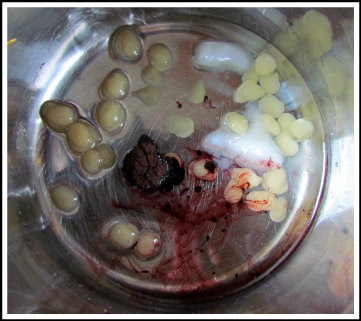 The recipe was very quick to make, stirring first on low heat until everything had melted and then I stirred a bit longer until the salve begun to thicken, then I scooped it over in small jars. The original recipe states " a little" of the Alkanet root, which leaves the amount very much up to individual taste. I started out with 1 ml and then added more until I thought the colour was deep enough.

Here you can see how the colour got darker the more pigment I added, though it still remained quite sheer. I compared it with the lip salve I made with Iron oxide and though it's a bit hard to see, the Iron oxide it much warmer in tone, while the Alkanet root reminded me of blackberry jam.

There is also a huge difference in texture. The Iron oxide salve is more opaque (if still sheerer than modern lipsticks) and is also matte. I have also found that the colour is buildable if you want a deeper tone. The Alkanet root salve is very sheer and glossy, looking and behaving very much like modern lip gloss. 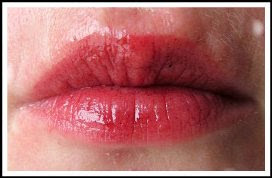 After blotting, the shine and most of the colour went, leaving the lips with a very natural rosy shade. 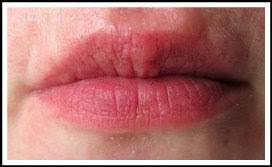 What I would do different
Nothing, the recipe works very well. However, it would be interesting to make the more opaque salve with myrrh to see how the Alkanet root behaves. And vice versa, how Iron oxide looks in this sheerer formula. 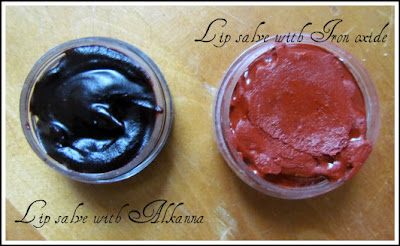 Would I do it again?
Yes, I think so. The salve is very pleasant to use, I have now worn the blotted residue for several hours and my lips feels very soft and supple. It also gives a very nice natural colour, which I think is great if you don't want a painted look. You will need to reapply it regularly though, as eating and drinking makes it wore of very quickly.

I have managed to lure a couple of friends to have their makeup done next Saturday and I think it will be very interesting to see how people with different colorings will look.
Posted by Isis at 09:40