I finally had time and material enough to try out Queen's Royal, the mystery recipe I talked about here.


In the original recipe only the Bergamot and Lemon are stated to be essential oil, the rest are just oils. Essential oils are made by distillation, but you can also perfume oils by steeping the scent material in it for some time. 18th century recipes are notoriously unclear of what is used so even if the recipe might suggest that the two different kinds, that might not be the case. As essential oils are what is readily available if I used that. Essential oils are not particularly oily, so if using the other kind, the end result would be fatter. As for the pigments, Ican't be sure on the exact shades that were used in the 18th century. Black is, I suppose black, and the original Vermillion is a warm-toned red. Brown ochre is a warm-toned brown, but the rose-pink? I'm not sure. I used a fairly pale pink as that was what I found, but rose-pink could mean a pink more akin toward red. 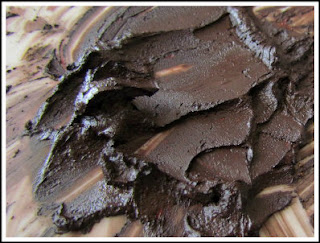 I mixed the pigments and then I dripped in the essential oils before I mixed it very well. The end result was a rather stiff paste in dark brown with reddish hints. It first smelled very strongly of the Bergamot and Lemon, but after a while is smelled more spicy, with Cinnamon as the dominant smell. At first it was easy to spread out, but the essential oils evaporated quite quickly and the dried out pigment crumbled into powder when touched. I tried out the various thoughts and suggestion of the purpose of this scented mystery and here are the results. I've lumped similar suggestion together.

A scented powder to make into sachets? No. Scentwise it would work, but the very fine and very brown powder would eventually work itself out of a fabric sachet and discolour things around it. no sense in using pigment is something that you can't see.

A rouge for cheeks or for the nipples? For cheek rouge I would say a definite no- it is far too brown. As nipple rouge, though, I think it is plausible. It was very easy to spread out on skin and though it tingled slightly upon application due to the cinnamon, that feeling disappeared very quickly. I applied it thickly, medium thick and thinly on my arm and found that the two thicker layer started to shed pigment as soon as it dried out. There are nothing in this recipe that would help it adhere like Gum Arabic. The sheer application stayed on quite well, though. here.) So yes, I think this recipe may have been meant to tint nipples. However, the pigment rub off at the touch so even if it would show up if covered by a lightweight chemise, it would also discolour the fabric, so it would only be useful if the nipples were completely bare. The scent would work well here too, as it would drift up from the chest.

The pigment is clearly brown, but with a warm red tone on my arm so for the sake of science I did try it on a nipple as well. No, there are no pictures of that, you will just have to believe me. I can tell you that the result was a darker nipple that still looked fairly natural. I did some research in the habit of showing the breasts in the 17th and 18th century and though never common, it was fashionable from time to time and it was not completely uncommon on stage and masquerades. (A whole blog post dedicated to the subject can be found here.)

Tinted perfume meant for hair powder? As the end result is a brown pigment with a scent, this could work. In fact, the only thing against it, is the fact that all the other hair recipes in the book are all together and clearly stated to be just hair powders. There is also a recipe for dark brown hair powder, so why not put this together with that one?

To tint grey hair? Probably not as the preferred method to hide grey hair in the 18th century was to powder everything white. I did smear some in my hair though, and it did turn nicely brown, so it would work. It doesn't adhere well, though. 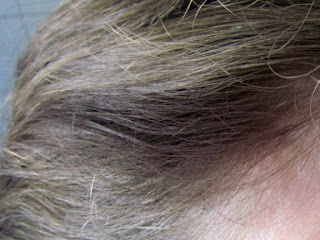 For tinting eyebrows or pubic hair? Plausible when it comes to tinting eyebrows. I used a stiff brush to paint my eyebrows and it worked remarkably well, making them dark, but not as harshly dark as a black tint. I was a bit worried that the scent would irritate my eyes, but there was no problems at all. I left it on for an hour or so and during that time the scent drifted around my face, but not very strongly. I have actually read modern perfume tips that you should perfume your eyebrows as perfume lasts longer on hair than skin. As for pubic hair, well... I did not try that- I hope you excuse me for not going all the way, but I don't think it would work anyway. It would just rub off on clothes, I think. 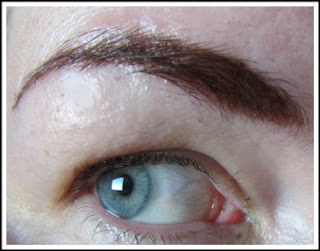 A repellant for lice? I can imagine that the scent could be thought to repel vermin, but the pigment would make everything it touched brown, so I don't think so.

Scented pastilles for burning? Possible. The pigment was easy to shape into pellets, they were almost impossible to handle when they were dry, due to teh fact there is no binding agent. They did burn, though, with an alarmingly huge flame. While it burned the only smell I got was smoke, but with the flame extinguished the smell of the essentials oil came through much stronger. So burn and smell-wise it worked. What talks against is is the lack of a binding agent. As they are now they would crumble into dust with a minimum of handling. However, as a powder it would probably work to trow it into a fire to scent a room. I have never heard of that method being employed in the 18th century, though. The biggest argument against it, is the use of pigment. Pigment was expensive and though one might want to colour something to make it pretty before use, the dark brown of this recipe isn't very pretty at all. So why use up a lot of expensive pigment just to burn it?

I didn't try the last suggestion, though:

To rub into a porous material to give scent and tint? That would work, I think, on wood or bone, but again, I would think it would discolour everything it would come into contact with, unless one sealed the pigment in some way. And would that not mean sealing off the scent as well?

As you can see, the result is inconclusive. There are a few things that it very probably wasn't used as and some that are possible. To my mind the most plausible uses are eyebrow or nipple tint as that seems to make the most use of both pigment and scent. What do you think? Or perhaps you have an idea that is much better that I haven't thought of? I promise, if I find out more, I will keep you updated. It was a lot of fun doing this experiment, though!

One thing I consider doing is to mix the same proportions of the esential oil together, adding a neutral oil to make a perfume oil. Though it wouldn't, strictly speaking, be an original perfume recipe, it would still be an 18th century perfume blend.
Posted by Isis at 09:51